For Christmas this year, Todd’s sister, Annie, gave each of my kids a $25 gift certificate to Kiva, an online microfinance organization.  Ever since I discovered Kiva it has been one of my favorite, inspirational nonprofits. Sometimes when I’m having a bad day I just hang out on their website!  They produce some wonderful little web-videos profiling their entrepreneurs.

On Kiva’s website you choose who to support from a cast of hundreds (complete with photos and life details) and thus feel a connection to the person to whom you are lending.

Stephen, our twelve-year-old, jumped online first with Todd peering over his shoulder.  Since we visited Guatemala last summer Stephen hoped to support a Kiva entrepreneur from that country, but sadly Guatemala was not among the options this time.

Stephen ended up proudly funding Eduardo from Colombia.  He owns a fruit stand and hopes to buy a small store from which to sell his fruit.  Stephen smiled when he related his choice, clearly feeling a bond with entrepreneurial Eduardo.  He then reminded me, “Colombians are supposed to be the friendliest people in South America, you know.”

Next up was Daniel.  He also wanted to fund someone from a Spanish-speaking country since we had traveled to two in past summers.  (One never knows when or where travels with kids will make an impact, but both Daniel and Stephen didn’t even consider lending to a non-Spanish-speaking person.)  Daniel chose Ernesto from Ecuador.  “I picked him because he has two kids he needs to support.  Oh, and he’s a goat farmer like Grandma used to be,” Daniel informed me excitedly.

“And Colombia and Ecuador are neighbors in South America,” Stephen hollered from the next room.

Annie, being only seven, needed a bit more help maneuvering around Kiva’s website, but there was one thing she was sure of:  “I’m definitely giving my money to a girl!”  Annie wanted to support a woman who ran a chicken farm in a Spanish-speaking country.  Two sets of our neighbors raise chickens and Annie spends much time tending to and studying them.  She was searching for a similar soul.

Alas the day we trolled through Kiva’s website, all the Latina chicken farmers had been loaned to already.  It’s quite likely Annie is not the only kid with chicken-raising neighbors.  Have you noticed this has become quite the phenomenon?

Annie enthusiastically chose a group of women from the Philippines who make and sell clothes.  And what 7 year-old girl wouldn’t love being part of a group of women focused on clothing?  This selection worked just fine for our Annie.  She marched directly from our computer to our world map to be sure she knew the location of the Philippines.  “I want to be able to picture where the girls live.”

It was a fun to see which Kiva entrepreneurs my kids chose and why.  I successfully kept my mouth shut while the boys made their selections, believing all Kiva loan requests are from deserving recipients.

However Annie’s decision to lend to women reminded me of the book I’ve been reading, Half the Sky: Turning Oppression into Opportunity for Women Worldwide, by Nicholas Kristof and Sheryl WuDunn.  Kristof writes a weekly column in the New York Times about this topic and has become one of my current day heroes.

In a New York Times Magazine article last year (August 23, 2009), he noted “there’s a growing recognition among everyone from the World Bank, to the U.S. military’s Joint Chiefs of Staff, to aid organizations like CARE that focusing on women and girls is the most effective way to fight global poverty and extremism.”

“The world is awakening to a powerful truth: Women and girls aren’t the problem; they’re the solution.  Half the Sky describes research on this issue, and gives numerous colorful descriptions of how microloans, for example, help women the world over.  Studies have found that “when women hold assets or gain incomes, family money is more likely to be spent on nutrition, medicine, and housing, and consequently children are healthier.” 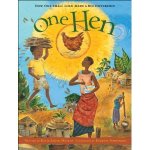 When my kids were younger, I wanted to teach them about microfinance but hadn’t had much success, when I came across a lovely children’s book: One Hen: How One Small Loan Made a Big Difference, by Katie Smith Milway.  I adore this book!  But more significantly, my kids love it too.  It’s an uplifting story about a young African boy who buys a chicken and how his life slowly changes from this day on.  But the book also subtly gives children a lesson in economics as they read.  I’ve seen each of my children return to One Hen more than once, after their initial read-through with me.

Since Stephen, Daniel, and Annie made their Kiva loans last week, each has wondered aloud about some aspect of their entrepreneurs’ lives.  This process also led to some significant conversations about gratitude.

I look forward to selecting three more Kiva loan recipients in the future with my kids when these loans are repaid.   What a thoughtful, long-lasting gift!

Ideas on additional ways to teach kids about microfinance?  Leave a comment below!

This entry was posted in Teaching Social/Emotional Skills and tagged charity gifts for kids, gratitude, Half the Sky, Katie Smith Milway, kids and microfinance, Kiva, microloans, my kids get too much stuff for gifts, Nicholas Kristof, non-material gift ideas for kids, non-things gifts for kids, One Hen book, Sheryl WuDunn, teaching kids gratitude, teaching kids to give back. Bookmark the permalink.

6 Responses to Teaching Kids About Microfinance