Starting at a New School 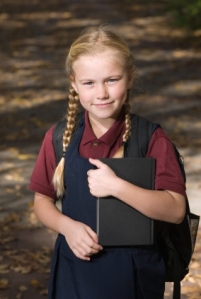 My friend Maria is moving her second grade daughter, Tina, to a new school next year. She thinks this school will be a better fit for Tina in the long run, but she’s worried about how Tina’s transition will go.

Maria recently asked me, “Will you write an article on helping kids make big transitions like this?” Ah, what would parenthood be without the seemingly constant need to help our kids through various life transitions?

Our son Stephen didn’t know anyone when he began kindergarten. I’m not sure who was more stressed by this, him or me. Probably me. I recall completely rearranging our summer schedule so that we could attend each of the four pre-kindergarten full-class play dates at nearby parks. At least after those I had a few names of kids I could use with Stephen when we envisioned kindergarten. Luckily he had already met his teacher during a school tour.

Maria is at more of a disadvantage here since Tina will be moving to a new school at the beginning of third grade, a less common time to begin. Now that I have a school-age daughter I know firsthand what all the books say: the girl social scene is much more challenging at this age than the boy scene. Practically all a boy has to do is bring a new ball to school and he is welcomed at recess. But the girl arena is infinitely more complicated.

Due to my trepidations, if I were Maria, I would contact the new school and ask to speak with one of the second grade teachers (who currently have Tina’s soon-to-be classmates). I might even ask for the one who tends to work best with girls. After telling him or her that my daughter was transferring, I’d ask for names of girls in Tina’s upcoming third grade class who are most open to new friendships. There are always a few. Then I’d request that Tina be put in class with at least one of these girls.

Of course a good teacher match would also be helpful, so I’d be angling for one of those too by asking other parents at the school about the third grade teachers. But, for a third grade girl, my priority would be getting her into a class with at least a few “welcoming” girls.

I’d also access the ever-strong, ever-knowledgeable parent network, to find other families who attend the new school, and to learn more about the school’s culture. In my experience, it’s only through the parent pipeline that you hear things like, “That teacher is great with active boys” or “Save some energy for the science fair project in third grade, it’s pretty much done completely at home.”

I’d also suggest that Maria think about what might be hardest for her daughter Tina about the transition. Tina will likely have a few worries at the forefront of her mind that Maria can help address and ease. Sometimes I give my kids something small of mine to put in their pocket on that first day. Most recently I’ve used a small, smooth rubbing stone for this purpose.

Thinking back to when I was in this situation, I knew Stephen loved the academic aspects of school. Therefore, when he was going to enter kindergarten knowing virtually no one, I found out what subjects they’d be studying and we talked a lot about these beforehand. This seemed to both excite Stephen, and help him feel more grounded and confident.

I also walked Stephen through his new kindergarten classroom a few times in the weeks before school began. The school was very accommodating about this. I remember Stephen was really enthused to see all the globes and maps in the room. Later, when he was nervous about starting school, I’d remind him about all those globes and maps, and he’d calm right down.

We also spent a lot of time playing on the playground at Stephen’s new school the summer before he began. Because I was anxious about my first kid’s transition to a new school, I put a lot of thought into the various aspects of school for a young child. It was a good reminder to think beyond merely teacher and new friends, to other aspects of school like the classroom, the subjects being taught, or the playground. Heck, we even toured the bathrooms!

Last year my kids’ winter break seemed inordinately long for reasons I still don’t fully comprehend. We’d had various house guests early on. Then we’d done a range of activities around town for the remaining days off. By the time school was finally about to begin again, it felt like we’d been off for months. During those last days of winter break each child told me, in one way or another, that they were worried about starting school again.

So I did for them what always helps me. We went to the school building and did a walk-through. Some of the teachers were there setting up for the new quarter, but the halls were generally quiet. We walked to each kid’s classroom and peeked inside, said hello to various staff members, and then left. It took all of ten minutes, but each child was noticeably more relaxed afterward.

My kids’ responses to this little walk-through exercise made such an impression on me. So much so that the day before middle school began this year, Stephen and I did a similar walk-through at this new school. Again it had the same positive effect.

Hope that helps a little, Maria.

Additional ideas for helping kids transition to a new situation?  Leave a comment.

5 Responses to Starting at a New School